Would you like to switch to the accessible version of this site?

Don't need the accessible version of this site?

Got wrist pain after falling? 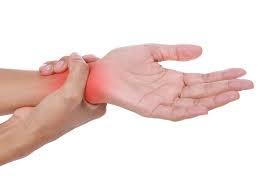 Now that winter has arrived and brought us lovely snow drifts and black ice, slipping and falling are more likely now than during the summer and falls months. One new complaint I often treat in patients during the winter months is wrist pain that began after falling on an outstretched hand (aka FOOSH injury, which is more fun to say).


There are a lot of complex anatomical structures around the wrist including nerves, arteries, veins, joints, ligaments, tendons, muscles, synovial sheaths and other important soft tissues. This area of complex anatomy can make it tricky for myself and other chiropractors to try and determine what specifically is causing wrist pain after a FOOSH since multiple different injuries and pathologies can all manifest as just “wrist pain.” 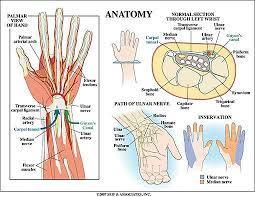 One question you might be asking yourself right now is “Ok, what if it doesn’t get better with conservative treatments or if the pain gets worse?” In patients with severe wrist pain after a fall, especially a FOOSH, the main problem I worry about is a fracture or broken bone. The best way to access for fractures would be digital X-ray which is thankfully in the US relatively cheap and readily available. Interestingly enough, there are cases where the fracture can be so small/minimally displaced that the initial x-ray can be normal, but a follow up x-ray is usually performed when a patient is still experiencing wrist pain that is not responding to conservative treatments.  If after the 2nd x-ray there is still no evidence of fracture and the patient is still experiencing wrist pain, we have to start thinking of other common causes of chronic wrist pain after a FOOSH. As you can see from the image below, some wrist fractures can be very difficult to detect unless you know what to look for (or have an arrow pointing at it). 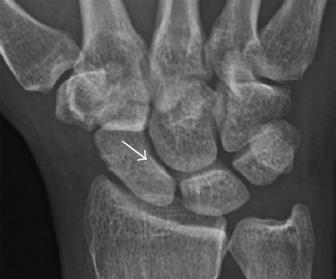 One common and sadly underdiagnosed cause of chronic wrist pain following a fall or other trauma is a tear of the dorsal scapholunate ligament. This ligament is one of the most important ligaments needed to provide structural support of all the carpal bones of the wrist. Much like the spine, the carpal bones of the wrist have a specific configuration that allows them to form arcs/curves that provide structural and functional support of the wrist during movement. If the scapholunate ligament is torn, this can cause instability within the wrist which
can lead to early onset degenerative joint disease or osteoarthritis that can manifest as chronic wrist pain. 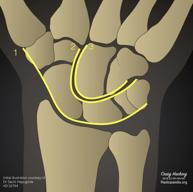 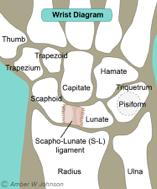 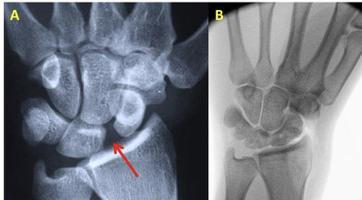 Scapholunate ligament tears may be detected on x-ray and are usually seen as joint space widening between two carpal bones close to the middle of the wrist and the thumb, the scaphoid and lunate. MRI or diagnostic ultrasound is the best way to look for and visualize the tears however. The main focus with MRI and diagnostic ultrasound is to detect the extent of the tear as tears that involve the entire ligament (full thickness tears) will almost always require surgical intervention while partial tears (<100% of the ligament) usually will respond to conservative therapies. Diagnostic ultrasound has one benefit over MRI in that we can mechanically stress the ligament with dynamic movement (clenching the fist) of the wrist to check for instability.