Would you like to switch to the accessible version of this site?

Don't need the accessible version of this site?

Case of the Week: Osgood-Schlatter 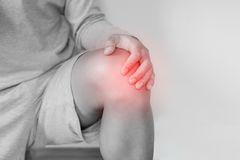 For this week, we will be discussing what is likely to be causing right knee pain in a 16-year-old female multisport athlete (track and field, softball, basketball) who is currently preparing for her Track and Field season by doing mid and long distance running three times a week.

She reports that the knee pain is primarily just below her right knee cap and she notices the pain gets worse with movement but is better with rest. She has had this same experience the last 2 seasons, but the pain went away on its own previously. This time however, the pain is worse and does not seem to be going away. She will also feel some pain in her lower leg, but most of the pain is at the knee right below the knee cap where it connects to her lower leg. She has x-rays from a week ago that shows no fractures or dislocation. She reports no feeling of instability or does not feel like her knee is “giving out”. Her range of motion is otherwise normal. She does notice that she has a large “bump” at the base of knee where it connects into her lower leg. After poking the large bump, she reports that it is painful. Any idea what could explain the patients knee pain? 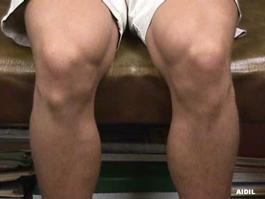 One challenge that multisport athletes will always face is making sure they allow adequate time for rest and healing in the off-season and in-between seasons. Even the mildest or seemingly insignificant injury can cause further problems down the road if not allowed to hear correctly or adequately. This is especially true in multisport athletes who are still using similar dynamic movements  in different sports; for example, in our case running around the bases during softball, running up and down the court in basketball, and running in track and field.

The continual loading and unloading of joints, ligaments, and tendons can eventually lead to tiny microscopic tearing within these structures and especially at locations where tendons are attaching to bony structures. The body will try to heal these tears by initiating an inflammatory response that can lead to swelling, redness, and pain often reported with this condition. A common sequela of tendon repair is the formation of scar tissue, which can also lead to thickening on the tendon. If the person continually retears or reaggravates the injury during the healing phase, the ligament or tendon can start to thicken and appear bulkier than normal. When this occurs, it is known as a tendinopathy. When a patient has tendinopathy of the patellar tendon (attaches your knee cap to your lower leg at the tibial tubercle) due to repetitive trauma and stress on the tendon, it is known as Osgood-Schlatter disease. 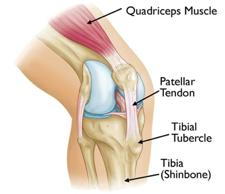 Osgood-Schlatter disease (OSD) is very common especially in runners and multisport athletes. The condition is very treatable in that rest and conservative treatments will be the most effective at relieving the inflammation in the knee and around the patellar tendon. Stretching the quadriceps and hamstring muscles have also shown to be effective and helping the athletes return to play faster. Surgery is rarely recommended. A knee pad or patellar strap may also be used while exercising or practicing to help relieve stress off the patellar tendon.

Other conditions that can mimic OSD are different tendinopathies around the knee at the bottom of the knee cap (Sindling-Larsen-Johansson disease), involving the middle of the patellar tendon (jumper’s knee), or inflammation of one or several of the bursae within and around the knee leading to an infrapatellar or suprapatellar bursitis. Ligament injuries are also fairly common in this demographic, but will usually present with an acute onset (not relapsing and remitting like this case) and will often complain of feelings of instability or like their “knee is going out.” Stress fractures may also present very similar, but can usually be seen on x-ray and are more likely in other locations of the leg besides the knee.